Knitting vs Crochet: Which is Easier? Which is Better?

Ah, the long argued age-old debate: knitting vs crochet. Over the years there have been countless discussions. Often passionate and heated discussions over whether crochet is best or knitting is best but at the end of the day, it all comes down to personal preference.

As with anything in life, there are pros and cons to both crocheting and knitting. In this blog post, I’m going to try to help you figure out which craft is best suited for you. By the time you get to the bottom, you’ll be fully armed to decide if you’d like to learn how to crochet or learn how to knit.

Crochet vs Knitting: Figuring Out Which is Better for YOU!

Below you can read about my personal experience learning how to knit and crochet. First I’m going to outline some of the similarities and differences between crochet and knitting. Like anything else, there are pros and cons to each craft and if you can match those with what you prefer personally, it can give you a great place to start. 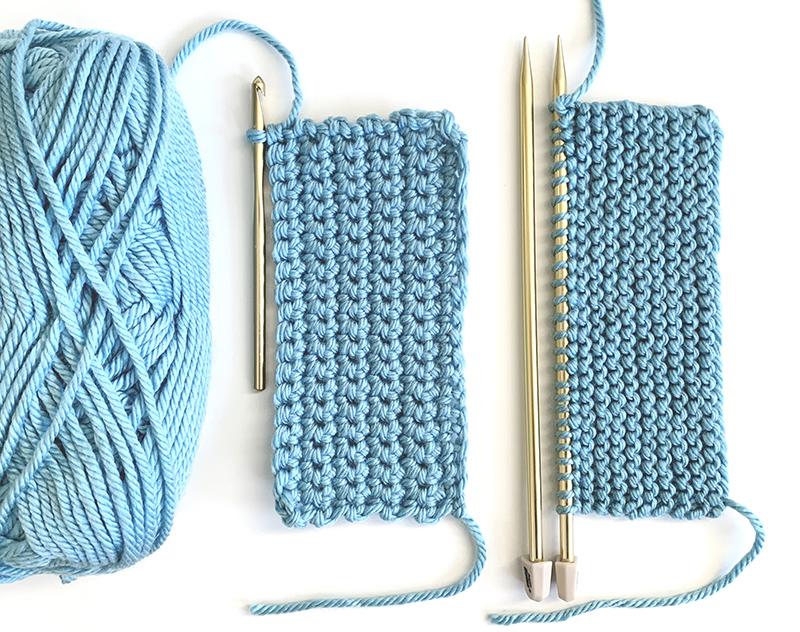 What’s the Difference Between Knitting and Crochet?

While knitting and crochet both make items out of yarn, the process, tools and architecture of the stitches are very different.

Crochet uses a single hook to create stitches. The hook creates loops in the yarn that in turn makes a knot, which overall makes a denser, more textured fabric than knit fabric (although there are a few stitches in crochet that can make knit-like material).

Crocheters use hooks instead of needles to make their crochet projects. There are a variety of shapes and sizes of hooks but all of them have a single hook on the end of the tool. Crochet hooks can be made from aluminum, plastic, bamboo or steel.

Crocheters hold their hook in their dominant hand and the yarn in the opposite hand. There aren’t really any different styles of crocheting but there are different ways to hold the crochet hook including the pencil grip and the knife grip. You want to be careful how you hold your hook and yarn or you can strain your wrists and fingers and even develop arthritis.

Generally speaking, crochet also tends to use about 1/3 more yarn than a similar knitting project does. 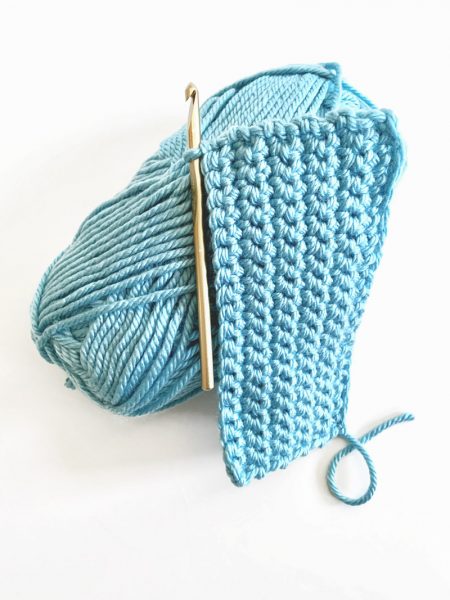 Knitters use two needles to create stitches with yarn. The knitting pattern you’re working on will determine the size, type and length of needles you’ll use for the project. There are straight needles, circular and double-pointed needles and if you get into knitting, you’ll need to figure out what needles you require for the type of project you’re working on.

Knit fabric has a very different structure than crocheted fabric. Knitting makes a “V” shape in the most basic form and it tends to be more woven instead of knotted. Generally speaking, the main stitches used in knitting are the knit and the purl stitches. That being said, there are a huge number of knit stitches that you can make based on those foundational stitches.

Knitters hold needles (straight or circular knitting needles) in both hands as well as the yarn in one of their hands. There are a number of styles of knitting so which hand you hold the yarn in depends on the style of knitting you use. For example, knitters can knit in some of the following styles. 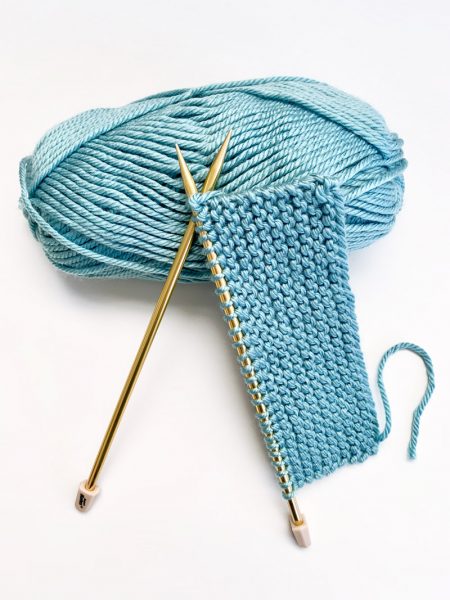 Similarities Between Knitting and Crocheting

Both knitting and crocheting require good hand-eye coordination, the ability to read patterns and handle yarn and tools in both hands.

Both crafts are relatively inexpensive to start as a beginner. All you require is some yarn, a hook or knitting needles, a pattern (which are readily available for free online), some scissors, and a few stitch markers and you’re off to the races.  Generally speaking, knitting used a smaller amount of yarn compared to crochet.

One of the biggest benefits of both crocheting and knitting is the way that these crafts offer a form of relaxation and movement meditation. Both crafts are well known to help alleviate anxiety and panic disorders.

When it comes down to it, you know yourself better than anyone. It’s not really about which craft is better, it tends to come down to personal preference and what you’re better suited to.

Select crochet if you…

Select knitting if you…

My personal experience learning how to knit and crochet…

My first foray into the world of needlecraft started with knitting. My earliest memories were trying to balance the yarn and 2 large needles in my hands at the same time. I learned the English style of knitting (also known as throwing). And often, I found myself resting the needles on my lap to try to make sure I wasn’t dropping them.

The other frustration that I just couldn’t get past was what to do when I made a mistake. When you’re a newbie knitter, a dropped stitch can be your worst nightmare and can take hours to recover from. Most of the time, as long as I wasn’t too far into the project, I’d literally rip the yarn out and start the knitting pattern all over again because it seemed easier in the long run.

After a few modestly successful but frustrating attempts to learn how to knit, I was camping at the beach when I noticed the neighbor in the site next to me quickly making the most incredible hats. We had kids the same age so it was a great opportunity to spark up a conversation and investigate how she was making these incredible masterpieces. The neighbor explained to me that the hats weren’t knit but crocheted. What was this strange but beautiful craft? She was kind enough to offer to teach me how to crochet a hat. Luckily, I had some yarn with me and she lent me hook.

What do you know, I breezed through that hat like a master on my very first attempt. I remember thinking, why would anyone knit when they could crochet instead? After that day, I was hooked on crochet and so began a wonderful new journey for me.

Since that day, when I learned how to crochet, I’ve learned a lot of new skills and techniques. I’ve realized how relaxed and zen-like I feel when I crochet. BUT, I also realized that I was starting to drool over the fabric and draping of knitted patterns. While my hands and heart were feeling the pull to knit, my brain kept on reminding me of my less-than-stellar experiences trying to learn how to knit.

The hours of trying to figure out how to fix my mistakes, especially now that when I crochet, if I make a mistake, it’s a simple matter of ripping out the row(s) and then simply starting again.

The urge to knit was too great and eventually, I decided to give it a try. This time I had years of crocheting experience behind me…would it help or hinder my attempts to learn how to knit?

I approached my learning differently this time around and Googled “how to knit for crocheters” and it was the best thing I could have done. It turns out there are many ways of holding the yarn and needles, other than the English style. In fact, I found out that “Continental Knitting” is actually considered a preferred method for crocheters. Hallelujah and eureka, I discovered a big part of the knitting puzzle!

The other huge breakthrough for me was learning about the anatomy of a stitch, stitch orientation, and how to visually identify the components of what makes a purl stitch look different than a knit stitch (which every new knitter should learn to save them hours of frustrations).

I still consider myself somewhat of a knitting newbie. But I feel confident enough now to be able to understand the basics of knitting, fix common mistakes and create shaping. Now if I can learn how to knit faster, I’ll be an even happier girl. But I’m confident that will happen with more time and practice.

Do we have a clear winner between knit vs crochet? In retrospect and with the benefit of experience, if you haven’t really made up your mind and are on the fence about whether or not to start knitting or crocheting first, I would recommend starting with crochet first. I believe it’s a much easier skill to pick up initially compared to knitting.

For me, I became frustrated with learning to knit when it came to making mistakes. Let’s face it, there are always going to be mistakes in the beginning. However, when you make a mistake in crochet, it’s a much easier process to fix which means much less frustration.

Taking up a foundational course to upskill

I really wish I had taken a foundational course when I was starting out that taught me all the skills and techniques I’d need to get going. Now that I know what I know, I’d recommend this class if knitting is a new skill for you and you’d like to take things to the next level so that you can be a confident knitter. Check out the professionally filmed Learn to Knit class that will take your knitting skills to the next level. At the very least, you should definitely start by watching some YouTube video tutorials to get started.

My other revelation about knitting and crocheting is that once you master crochet, it’s easier to control tension, yarn, and needles while learning how to knit.

Ultimately though, it’s up to you and really, you can’t go wrong. Both knitting and crocheting are amazing hobbies and something that’s easy to fall in love with. I wish you the best of luck and many happy days ahead while you learn one or both of these amazing crafts.

Tips for starting out

A final word on how to get started. I have a couple of tips I’d like to suggest.

Ok, that’s all from me! I wish you the best of luck and many happy days ahead while you learn one or both of these amazing crafts. Happy knitting and/or happy crocheting! 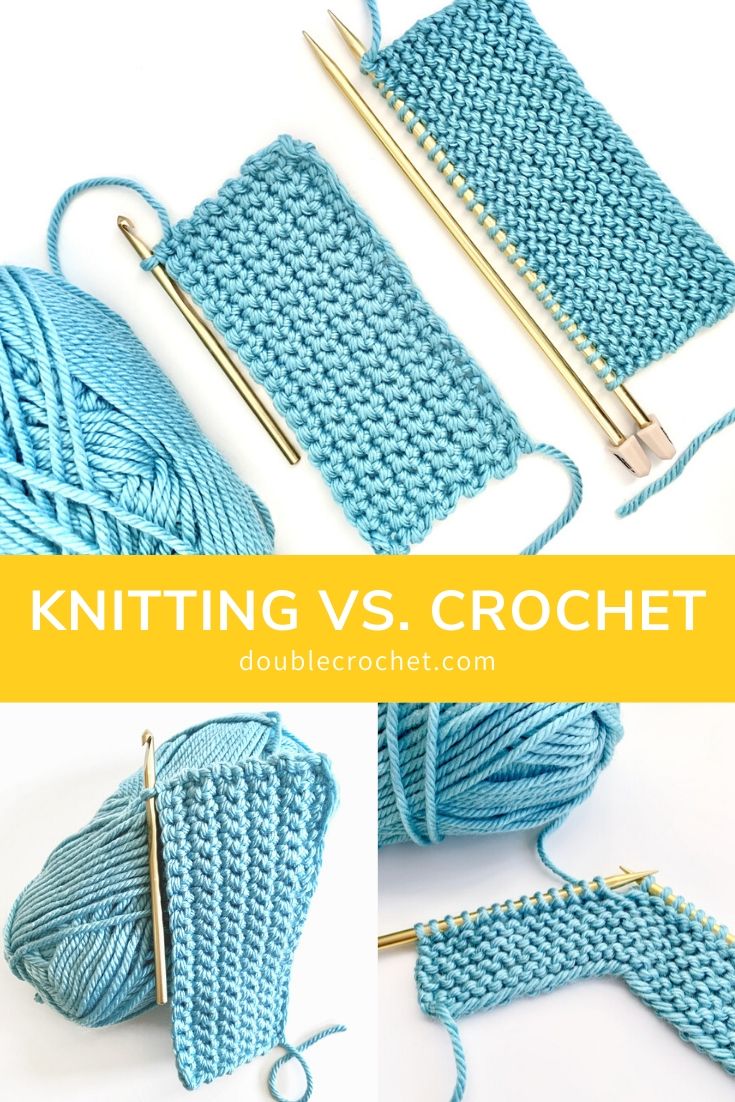 How to Double Crochet Stitch (dc): Guide for...