Everyone needs to start somewhere when they learn how to knit and a scarf is usually the first stop along the way. Having just learned how to knit in the past couple of years, I know the importance of being able to find easy scarf knitting patterns, especially free knitting patterns.

Making a knit scarf is a great way to start to learn about the basic knitting stitches, the knit stitch and the purl stitch. Once you are confident with these foundation stitches, you can move onto more complicated stitches and try new knitting techniques like lace knitting or cable knitting.

No matter what your knitting skill level, there’s a scarf pattern for everyone from the beginner knitter all the way up to the advanced knitter who’s looking for a quick and easy knit project.

Below you’ll find tons of fun and easy knitting patterns that are perfect for the various seasons – some thick and cozy and other scarf patterns are light and airy. These free knit scarf patterns have what you need to get working on your knitting skills and won’t break the bank.

If you know how to knit and purl you can make this scarf! Mistake Stitch creates a deep and lofty rib that looks like so much more work than it actually is. The beauty of this pattern is that it can be knit out of any size yarn with just a little bit of work! The mistake rib is worked over a multiple of 4 stitches plus 3 stitches. 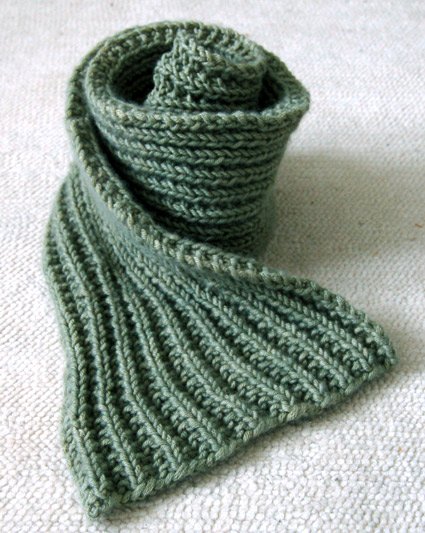 Here’s an easy scarf knitting pattern that’s perfect to wear in warmer Spring or Fall weather. Of course, it could be used in the winter too, but the open stitch-work makes it suitable for spring and summer. The mesh that is created in this knitting project is really easy to knit and it creates a really beautiful texture. The other nice thing about this project is that it doesn’t use a whole lot of yarn. This free knit pattern uses extra worsted weight yarn and is a great stash buster! 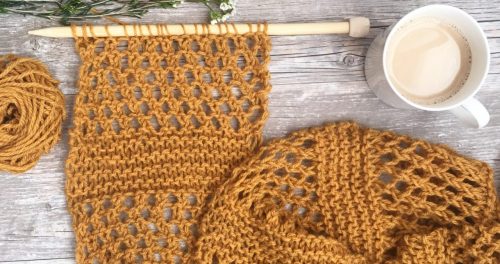 Beginner knitters will love this simple to knit scarf knitting pattern and all knitters will love the simplicity of a quick and easy knitting project. Since you’ll be using simple knit and purl stitches, bulky yarn, and big needles this easy scarf pattern will be done in no time. It’s also very versatile because you can easily adjust the width of the scarf. It won’t affect the knit stitch pattern and it’ll give you more choices for sizing your knitted scarf. 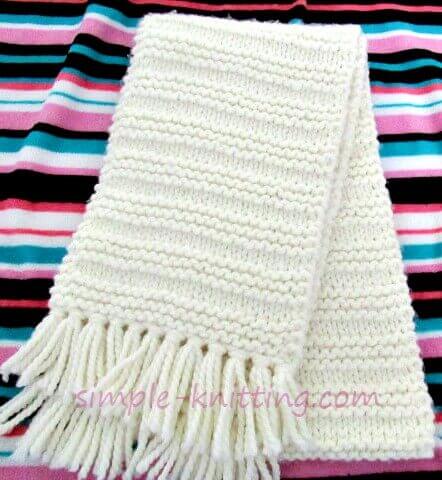 Christian’s Scarf was originally knitted in worsted weight yarn, however, it can be knitted in other yarn weights as well. The stitch pattern is very simple but has enough variation to make it an enjoyable knit. 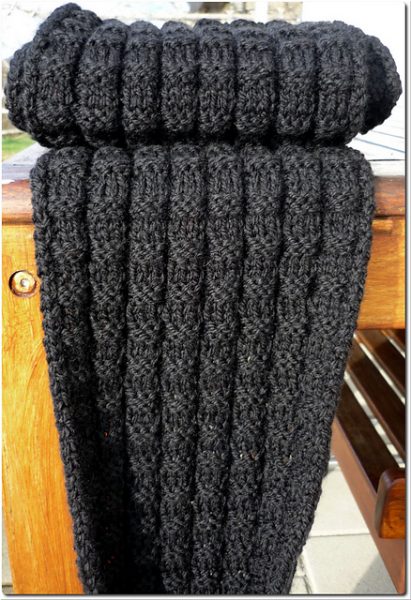 This infinity scarf pattern is perfect for beginners since it’s made up entirely of knits and purls. With just these two stitches, you can knit up a squishy, textured scarf using the mistake rib stitch. This is a favorite knit stitch because, despite looking complicated, it’s actually deceptively easy to knit! Best of all, this infinity scarf is knit up in super bulky weight yarn, making it a very quick knit. 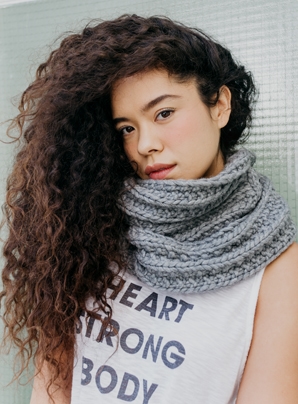 Herringbone is such a beautiful, classic stitch that is often overlooked in knitting. It can be knit up quite fast on larger needles and makes a dense, fluffy fabric. This herringbone knit scarf works well with winter coats, fall sweaters, and would look lovely both dressed up or worn casually. Any heather, hand-dyed, or dynamic color of yarn would look amazing in this stitch. 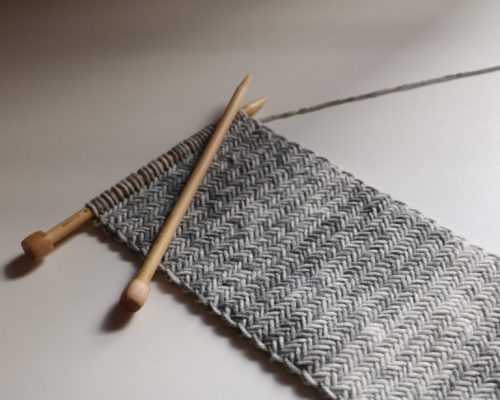 This easy hooded scarf knitting pattern is perfect for beginners because the hood is knit flat. It’s seamed in the back and then sewn on to the scarf. This hooded scarf is so cozy! It will keep you warm during cold fall and winter nights. It’s the kind of knit accessory you won’t want to take off! 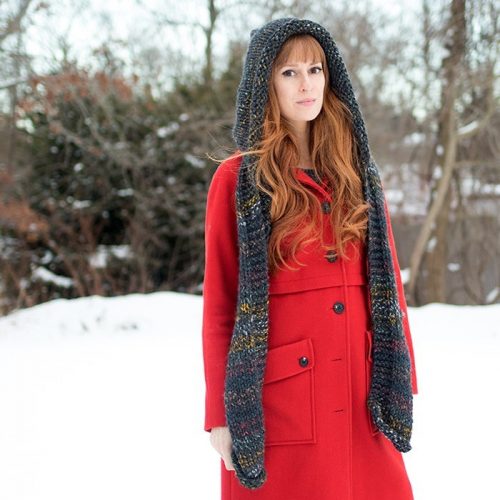 The bandana is a sassy, casual knit cowl pattern that suggests that the wearer possesses an innate stylishness. It’s the perfect accessory for those cool mornings when you’ve hit snooze a few too many times and need to turn “thrown–together–in–a–rush” into “casually glamorous”. This knit cowl uses approximately 100 – 130 yards and would be stunning made out of many yarns. 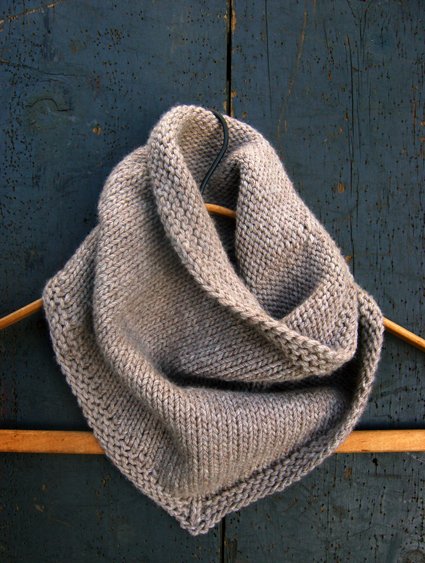 Here’s a light and airy knit scarf that’s knit using the lattice stitch. It’s made using a super bulky yarn and large knitting needles so it knits up really quickly. There’s also a wonderful video knitting tutorial with this scarf pattern as well, making it so easy to follow along. 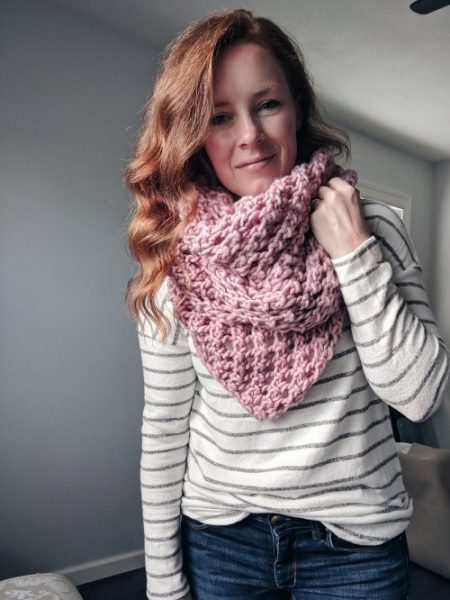 The waffle knit scarf pattern is very simple, making this a great project to work on in front of the TV. All you need to do is get past the first 4 rows, and then just worry about not making it too long! The waffle-knit pattern adds so much texture to the already super tactile Vel-Luxe yarn, and the double strands give it even more loft. It’ll be such a joy to wrap this around your neck! 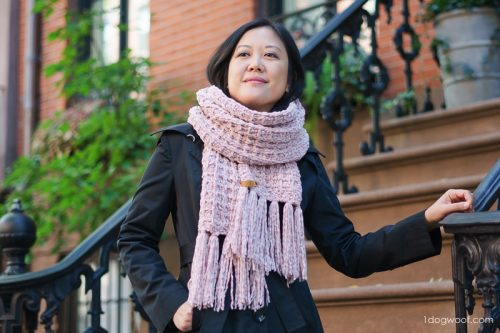 This scarf knits up fast in bulky yarn, is simple enough that even a brand new beginner can knit it, and the density of the fabric makes it light enough to wear now, but wrap it double and its thermal properties activate! It’s also 100% reversible.

Pattern via Hooked for Life

This knit scarf pattern is started off by holding two strands of the yarn together. Since the majority of the scarf is worked in stockinette stitch, a light ribbing is added at the bottom to help prevent the scarf ends from curling. As you can see, this scarf is made extra wide since we knew the sides of the scarf would also curl due to the inherent nature of the stockinette stitch. As a reminder, stockinette is worked by knitting all the stitches of one row, and then purling all the stitches of the subsequent row.

Pattern via All About Ami 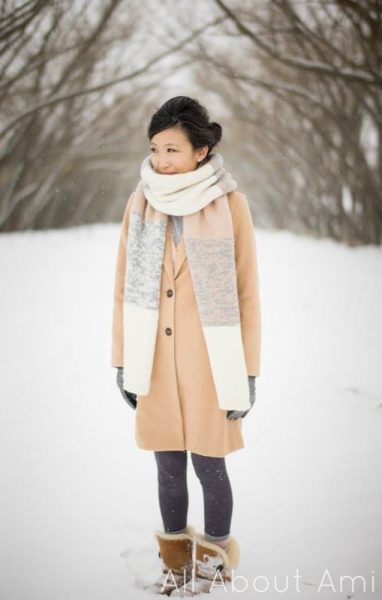 This cozy ribbed knit scarf pattern is made using a simple 2×2 rib stitch using two skeins of chunky alpaca yarn. It knits up quickly and makes a wonderful gift to give to someone special.

Pattern via Lady by the Bay 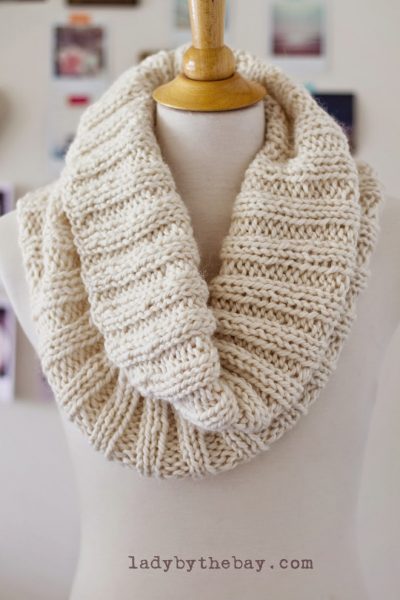 An impressive yet easy to knit scarf in the style of a great Italian designer. The chevrons are worked with single increases and decreases – no knots in your fingers trying to knit complicated double decreases and no double increases where the stitches get tight and hard to work with. 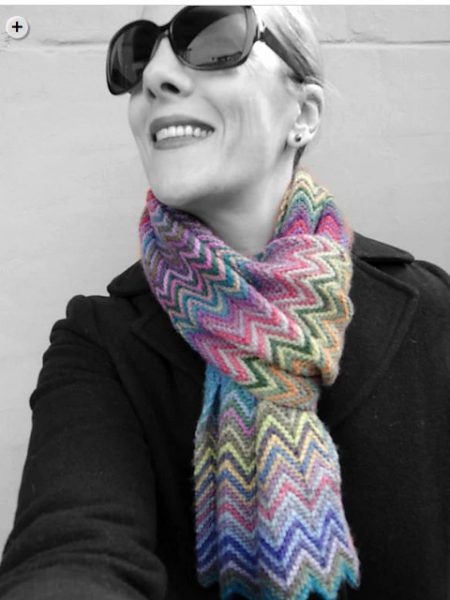 The Wolkig knit cowl is a twisted cowl and has extra volume due to strategically worked decreases and increases, so it can be stretched a little to fit comfortably over your head when putting it on. Stretched in the other direction (lengthwise), it will fit snugly around your neck without leaving any gaps where the cold wind might sneak in. The best thing is this: Wolkig (named after the German word for “cloudy”) has only one line of knit pattern. If you feel like it, you can use more yarn and work the cowl longer, so it doubles as a very cozy, cloudy tube scarf. 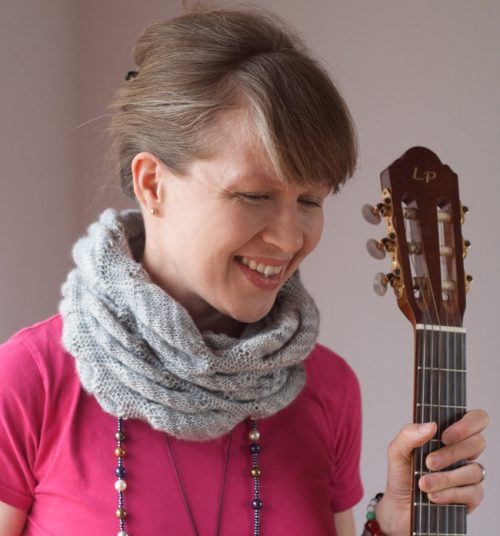 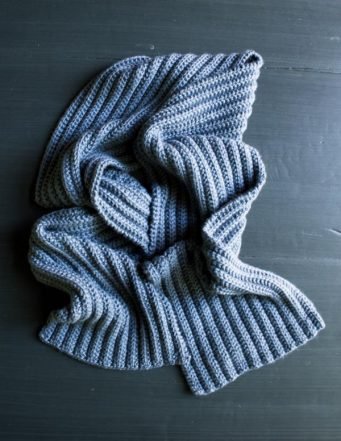 This elegant knit scarf is knit on the bias so the variegated yarn makes diagonal stripes and stitches are carefully dropped to make a pattern in the opposite direction. This creates a scarf which tends to be a little more of a parallelogram than a rectangle. Instructions are included at the end of the knitting pattern to modify it to create a knit store. 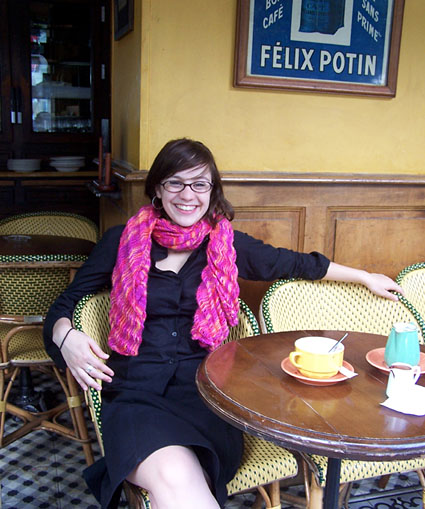 This half fisherman rib knit scarf turns out quite beautiful and it works up quickly too even though it’s big.  Many knit scarves measure around 60 inches long, but this one is right around 90 inches long and 10 inches wide! It’s super big and chunky, but it’s an easy knitting pattern to modify and make the scarf into any size you’d like. It makes the coolest looking knit fabric too. Both sides of the scarf are beautiful and each has a slightly different look. 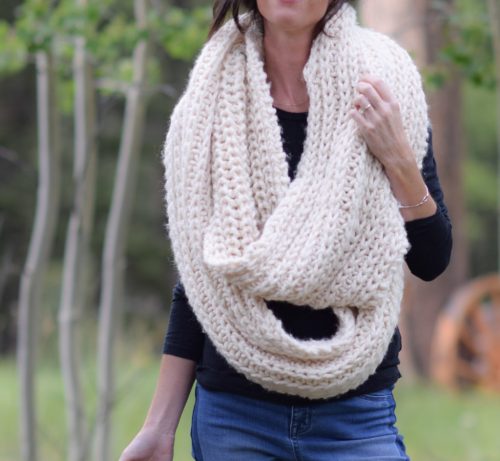 Looking for an elegant scarf that is suitable for anyone of any age? Look no further! This gorgeous seed stitch scarf knitting pattern is perfect for beginners and features a beautifully textured seed stitch design. Perfect for men, women, and kids! 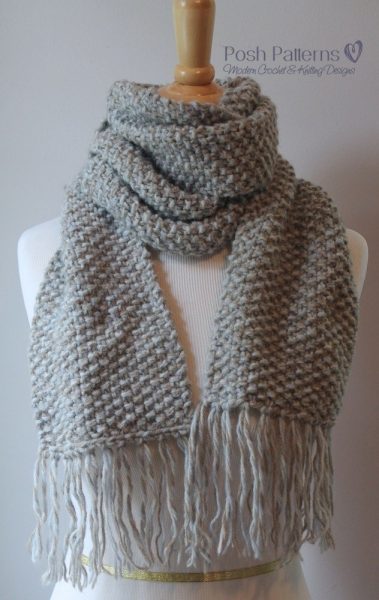 A simple lace knit scarf with five panels of branching pattern repeats and a moss stitch edging border. Knitting skills you will need: cast on, cast off, knit two stitches together, bring the yarn forward, knit through the back of the loop. 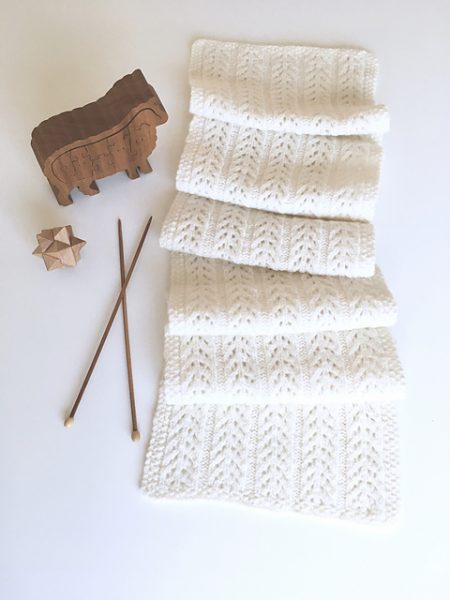 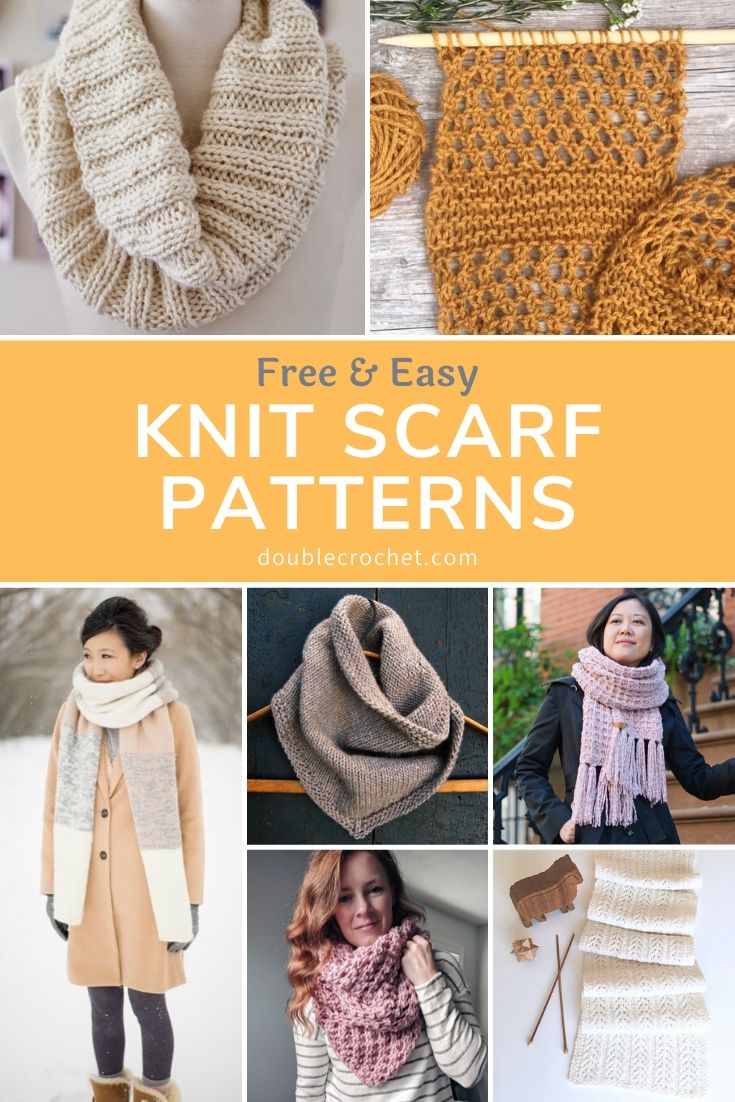